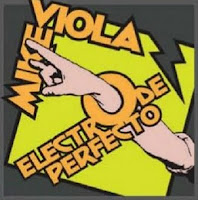 Mike Viola-Electro de Perfecto. Mike Viola needs little introduction for readers of this site. From his power pop band Candy Butchers to his work with Bleu (in LEO & The Major Labels) to a budding solo career, the one constant has been great pop songs. On his latest solo effort, Viola steps back a bit to create his most assured, mature recording to date while continuing to deliver the tunes. You might not realize this from the opener, the frenetic "Columbus Day Parade", but "Get You Back" (with Semisonic's Dan Wilson on harmony and FoW's Adam Schelsinger on bass) is magical midtempo pop, and "Soundtrack of My Summer" will be the soundtrack of your autumn with its clever, easygoing melody. Elsewhere, "Inside Out" is catchy as hell, and the closer "When the Stars Against You" is a wonderfully moody take on dealing with life's adversities. You probably don't need me to tell you to buy a Mike Viola album, but if you had the slightest hesitation my advice is to just do it.

Miles Zuniga-These Ghosts Have Bones. It's hard to believe that this is Miles Zuniga's first proper solo album (although he did release a record in 2006 with his side project The Small Stars), but at long last the guy responsible for my most of my favorite Fastball tracks ("Fire Escape", "Airstream", "Mono to Stereo") gets the stage to himself. And These Ghosts Have Bones is worth the wait as Zuniga's pure popcraft is on full display. The Lennonesque opener "Marfa Moonlight" is wonderful, one of 2011's most unforgettable tracks and its lyrics are the source of the album title. "Rock Paper Scissors" is an excellent rocker that would have easily fit in on a Fastball record, while "Feel it in Your Kiss" displays a faint 70s R&B influence. Elsewhere, "Working on a Love Song" is a catchy number filled with irony (the writer of the song finishes it just in time to find its subject left him), and "Junkie Hands" finds Zuniga in a late-period Beatles state of mind. A great solo debut from one of my favorite pop songwriters, and a strong candidate for 2011's top 10.