The first of many 2010 oversights.

I'm sure I'll have many oversights from 2010 list, and here's one that comes to mind right now: Truth Is from Nick Young. Young's name may not be familiar, but the band he went solo from may be - Burning Daylight. Their 2007 Whiskey & Romances was a Popicana delight, and so is this album. I don't have time to give it a proper review, so just trust your own ears and give it a listen below:

As promised but a little late, here is our Top 10 EP list for 2010. Also I'm proud to announce for the third straight year, David Bash's exhaustive year-end lists will be featured on this site. Look for 'em by mid-January.

My #1 came out late in the year, so I didn't have a chance to get a review in. It's the followup to 2005's File in Rhythm for Brad Senne's side project, and it's excellent indie pop that has power pop elements to it. I can still hear "Cecilia" in my head as I type this. Here's an iTunes link as well:
Posted by Steve at 11:00 AM 1 comment:

A few words on my choice for #1. First off, it may come as a surprise to many of you since I never actually reviewed it on the site (although those who follow my Twitter feed saw me praise it more than once). The reason for this is that The Autumn Defense, being a relatively well-known act featuring two members of Wilco, don't exactly need a review from me to get noticed. Generally I spend my time on this site bringing to light the obscure and the overlooked and the independent, DIY pop artist.

Having said that, though, I'd be remiss not to point out what I loved so much about this album. It's the ultimate distillation of their sound - they finally embraced their folk/rock leanings and combined them with the melodic, 70s soft-rock sound they've cultivated over the last decade. Previously they had leaned too fair in one direction (folk/rock 2001's The Green Hour) or the other (2003's Bread-inspired Circles) or forgot the distinctive tunes altogether (I cannot recall one song from 2007's self-titled album). Here, they start off strong with possibly my favorite song of the year, the Beatlesque "Back of My Mind", continue strong with "Tell Me What You Want", the rare song where relatively unmelodic verses strengthen the powerful, propulsive chorus, add the Pearlfishers-like "The Swallows of London Town", the mellow and inviting "Step Easy" and the perfect chamber pop of "Every Day", which favorably recalls their all-time best track "Bluebirds Fall" (from a split EP with Hem). For 11 songs, John Stirratt & Pat Sansone finally live up to their potential.

Hard to believe this is fifth year of Absolute Powerpop, and the fifth year of making this list. I've had the privilege of listening to hundreds of excellent discs, and my iTunes library sits somewhere around 38,000 tracks, about 95% of which is from these five years. For today, here is the bottom half of the list:

Just a heads up for those looking that my Top 100 list should be up starting Thursday, probably in two chunks with 100-51 first and then 50-1 on Friday. I do reserve the right to shorten or lengthen it once I've gone back through the year's releases. The EP list will follow between Christmas and New Year's. MySpace | iTunes | CD/Vinyl (from England)
Posted by Steve at 7:08 PM No comments: 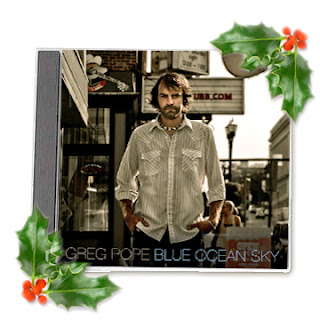 Wow - a nice holiday gift for everyone: the new Greg Pope album Blue Ocean Sky, and it's free for the downloading until December 20th. I haven't had a chance to listen yet, but unless he's now into death metal or Yoko Ono-like screeching, it should be great.

Download it at his official site.
Posted by Steve at 11:22 AM 2 comments:

With Not Lame sadly out of the picture, Kool Kat continues to take the power pop ball and run with it and they've leveraged their impressive stable of artists to come up with what not is only the best power pop Christmas album you've heard, but perhaps one of the best albums of the year.

Each artist contributed an original tune, and they all play to their strengths. Maple Mars' "Christmas Time in the City" celebrates Christmas in LA, the lyrical opposite of "White Christmas"; The Smith Brothers give us their signature breezy pop with "Every Day is Like Christmas", and Mike Giblin and Parallax Project's "All I Want for Christmas is a Chance" might be one of their best tracks ever. Meanwhile, Keith LuBrant's "The Christmas Spirit" is an energetic highlight, The Strands' "The Christmas Gifts" is a Ramones-like ode to finding where your parents hid the gifts, and Frank Royster serves up his usual fine retro-pop with "Christmas is Fun".

The real standouts, though, are a couple of somewhat tongue-in-cheek tracks. The Britannicas go for some old-school country rock with "Chris Hillman Christmas", in which they'd "rather listen to Jesus than to Wilco" and they'd "rather go back to jail than to see the Eagles reform again". And closing out the disc is The Goldbergs' "Channukah Guy", in which Andy Goldberg professes his love for all the trappings of Christmas, and is catchy as anything he's done (which is saying something).

And not only does A Kool Kat Kristmas have the tunes, but its heart is in the right place:

$5 FROM EVERY CD SOLD WILL BE DONATED TO THE SUSAN GIBLIN FOUNDATION: The late wife of Mike Giblin of Parallax Project, Susan Kroah Giblin held degrees both as a Paralegal and as a Certified Veterinary Technician, a degree that she obtained after going back to school at the age of 35. As one of Central PA's greatest friends to cast-off and wayward animals, she was a 17 year volunteer at the Helen O. Krause Animal Foundation, and served as its medical coordinator for nearly a decade. She also maintained a fostering room in her home which was rarely empty, and was well-known for her compassion, empathy, and personal connection with both patients and their owners. The Susan Giblin Foundation for Animal Wellness and Welfare was formed to honor the memory and continue the work of Susan Giblin, a Certified Veterinary Technician and noted animal advocate, who passed away from leukemia at the age of 46. The Foundation's mission is to raise and dispense funds to support animal caregiving organizations, to foster awareness and education of complementary therapies, and to support the continued education of those in the animal medical field

Between the quality power pop and the great cause, this is the one power pop disc to buy this holiday season above all others. Kool Kat | MySpace
Posted by Steve at 1:52 PM No comments:

For a special on NPR's All Things Considered, Fountains of Wayne took the circa-1890 poem "Song of the Passaic" and set it to their own style of music. The song is available as a free download from their official site, so go get it!
Posted by Steve at 12:21 PM No comments: