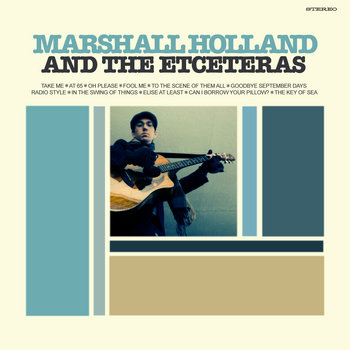 Marshall Holland-Marhsall Holland & The Etceteras. After returning to the scene in 2011 for the first time since 2004 with a new EP, Marshall Holland is back with his first full-length in a decade and it's the first standout pop album of 2014. Continuing in the same vein as previous releases, the San Franciscan offers up his winning mix of Posies/Brendan Benson-styled pop that also brings to mind the likes of Phil Angotti and Ken Sharp. "Take Me" is an amiable opener that shows Holland's songcraft at its finest, and the ruminative "At 65" is like a grown-up "When I'm Sixty-Four". Meanwhile, "Oh Please" is first-rate jangle pop, and the primarily acoustic "Fool Me" is another melodic gem. Also included here is "Radio Style", released as a single last summer, in which Holland decries the state of radio today and makes a well-earned plea to listen to more music like his, done so of course in the most melodic of styles. The album officially drops this coming Tuesday, but you can pre-order at Bandcamp. Steve Judd-Sugarcoated. Ottawa's Steve Judd brings up a mix of classic rock and power pop from north of the border with Sugarcoated and he isn't messing around, serving up a collection of crunchy melodic rocking tunes with sugar coating. The title track kicks things off in fine fashion (even mentioning the Russian mafia!), and "Takin' Us to Task" is a melodic rocker that splits the difference between Tom Petty and The Replacements. Elsewhere, "Lost and Found" slows things down a bit yet still rocks melodically, "99%" boasts a chorus that'll stick in your head, and "Liquid Courage" boasts a high jangle quotient. And Judd closes things out nicely near the end with the power ballad "Testament". This is a fine rocking disc, and I'm not sugarcoating things.