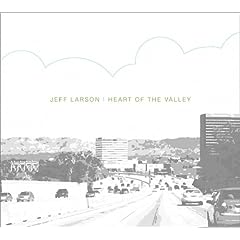 If George Martin, Billy Preston, Murray the K et al. have been known as the "Fifth Beatle", then Jeff Larson could be called the Third American, as in America the band. Larson has closely worked with America's Gerry Beckley and Dewey Bunnell over the years, but he takes it to a new level here with Heart of the Valley, which features eight original tunes penned by Beckley, two co-written with Beckley, and one Larson original. Beckley also produced, engineered and recorded the album.

Last year I wrote when reviewing Larson's last disc that "we all know the cliche about death and taxes being the only certainties, but there's another one to add to the list: about once a year, Jeff Larson will release a quality disc of laid-back California pop in the vein of America, Dan Fogelberg and The Eagles and make it sound effortless." With Beckley's help, he's done it again. The title track sets the template for the disc: an easygoing melody, fine singing from Larson and backing vocals from Beckley. "Sudden Soldier" is more in the vein of upbeat America, a la "You Can Do Magic", and "Minus Marci" (a Larson co-write) might be the album's best track with its irresistible chorus, fine Larson-Beckley harmonizing and some quality guitar work. Elsewhere, "Calling" is a great rainy day ballad, "Five Mile Road" sounds as well-worn and rustic as its title, and Bunnell himself sings backup on "Southern Girl", making the America connection complete.

Let's face it: a Jeff Larson disc is a no-risk proposition. If you enjoyed his previous releases and/or a fan of America and/or a fan of the laid-back 70s California sound, you've got your album of the year.