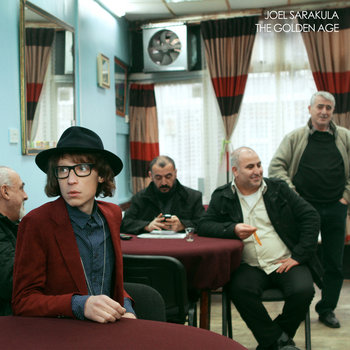 Joel Sarakula-The Golden Age. London-by-way-of-Australia's Joel Sarakula is a top-notch synthesist, taking pop styles from the 60s through the present day and mixing them up to create a tour de force that should appeal to anyone with a ear for melody and song structure. Sarakula first caught my attention in 2009 with City Heart, which found him primarily a piano popper. But as good as that album was, it didn't prepare me for the leap forward he takes here. The lean, spare piano sound of "I Will Deliver" starts things off in auspicious fashion, reminiscent of Spoon's "I Turn My Camera On" by way of Blur, while "Old Yellow Photographs" is a jaunty 60s, Merseyside-style pop romp. The Elvis Costello-influenced "The Lows" is a minor-key marvel, and "Only One Still Dancing" finds Sarakula singing in a Mika/Scissor Sisters-like falsetto that also reflect those artists' 70s influences. Elsewhere, "Matchstick Girl" is Teenage Fanclub-style guitar pop, "Good Books" is joyous, no-frills piano pop, and the lovely closer "Who's Gonna Love You Now" bears a Burt Bacarach influence. Another top 10 candidate for 2013. Mozley-EP. The mysterious Mozley strikes again. In an age where with a computer and an internet connection you can find out almost anything about anybody, this Arkansas rocker (I only know he's from Arkansas because it says so on the CD Baby page) remains an enigma with no website, Bandcamp page, YouTube channel or Twitter feed. In fact, I'm not even sure Edward Snowden could find him. So be thankful I regularly check out the CD Baby new release pages, because I can't think of another way to find out if he has a new release. Anyway, after a strong debut album in 2011 and a fine followup last year, he's back with a new 4-song EP that continues the Replacements/Big Star-themed sound of the two full-lengths. Moody rocker "Took it Easy on You" opens things and sounds as if it came from All Shook Down, and the (for him, ironically-titled) "Remember My Name" boasts a memorable keyboard hook while "Closer to It" has a Pixies/Nirvana feel. While it may not be the year's top EP, I'm including it here since there's probably no other way fans of the first two albums are going to find out about it otherwise.

What a great blog you have. Very unique style. Love your pictures. I will for sure visit back often. Hope you can visit my blog
The Art or War

I will be so honored if you like me on