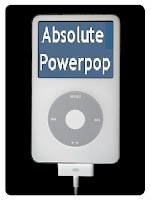 Time to start a new feature here which might strike some as lame, but what the heck, it's my blog.

I'm going to try to at least once a day (which will probably mean once in a while when I get around to it) list the last 10 songs played on my iPod. Rather than some look into what my favorites are, the way I use my iPod almost exclusively is as thus: I have a 1000-1100 song playlist set on shuffle. This playlist is comprised of 200 tracks picked from my 21000+ song iTunes library at random, with the remaining 800-900 being albums I've added in the last two months or so. The purpose of this exercise is multifold: to give everyone a peek into a sample of my daily listening (to the extent anyone cares), and to bring out comments on discs I'm enjoying but otherwise might not blog about (or that I plan to blog about soon). So without further ado, here are the last 10 tracks that popped up on the pod:

"Instead"-Paul Starling, Ghost Waltz. I grabbed this mp3 off his site or somewhere - don't have the whole album (if someone wants to send it to me, I won't complain). RIYL: The Now People, Nelson Bragg, The Wondermints, Brian Wilson, etc. MySpace

"Outerspace"-The Millions, Disrespectfully Yours. These guys rock hard but very melodically; they're probably about as "heavy" as I'm going to listen to on a regular basis. CD Baby | MySpace

"Believe In Me"-Rooney, Calling The World. These guys are major-label types I usually don't write about, which isn't to say they aren't any good. I've enjoyed several songs from this album, especially the ELO-ish "Don't Come Around Again".

"Nightfall at Electric Park"-Great Lakes Myth Society, Compass Rose Bouquet. I only just added this one to the rotation, so I'm not ready to offer up an informed opinion. Indie pop/rock that sounds quite melodic though - Pitchfork deigned to give it a 6.5. eMusic

"Getaway"-Ryan Calhoun, What Are We Doing Here.

"Rollerskaters In The Park"-The Afternoons, Baby, You Know The Deal. Melodic Welsh band whose Rocket Summer was a fine 2005 release. This "new" disc is kind of a combo of Rocket Summer and some other tracks. MySpace

"My Friend Hates Me"-P.Hux, Kiss The Monster. The latest from the Huxster. This is another random mp3 I got off his myspace back before that myspace mp3 thingy was shut down. Again, if he wants to send me a copy, I'll review it. :)

Well, this took a bit longer than I thought it would. But I'll try it again tomorrow.
Posted by Steve at 4:33 PM

Cool feature...here are the last 10 songs on my ipod/itunes with random shuffle:

Here are my last 10 played songs.. I almost always shuffle too, and as of last count had exactly 5000 songs in shuffle.

speaking of, they've got an awesome spread in the latest issue of ragged. peep it out www.raggedmag.com