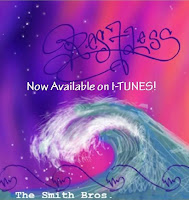 It may be Election Day in the USA, but forget Obama & McCain for a minute and cast your vote for The Smith Bros., who hail from the swing state of Ohio. Their new full-length Restless will take your ears in a landslide, without a hanging chad in sight. Now that I've dispensed with the electoral metaphors (had I done this another day, I would have gone the cough drop route), let me just say that this disc looks likely to be up there when the year-end list gets compiled.

Their sound is very reminiscent of Teenage Fanclub, with some Posies and a bit of Gin Blossoms/Tom Petty/heartland rock thrown in. If you don't hear the TF influence in the opening track, I'd tell you "How Wrong You Are", while the rocking "Down to You" brings to mind The Wallflowers and Minibar. "She's Under My Skin" has kind of a "Heartland Beatles" sound, and "Talk of the Town" betrays some Elvis C influence. Meanwhile, the straight-up power pop of "Every Day Gets Better" gets better with each listen, and "You Did It All" is another winner in the TF mold. Elsewhere, "Moments" is a more rocking Rembrandts-style track, and the midtempo "My Great Regret" has just the right mix of melancholy and melody to capture the song's mood. An outstanding disc from end to end, and fans of hyper-melodic pop will not be disappointed.

Nice recommendation- picked it up on emusic!