The Wellingtons-Heading North For The Winter. This fine Aussie band is now out with their third release, and I love the motto at their CD Baby page: "life's too short to listen to bad power pop". That's kind of the mission statement here as well, and you won't be wasting any precious minutes by giving this disc a spin. For the unfamiliar, The Wellingtons specialize in upbeat power pop, blending youthful exuberance with a classic sound, and Heading North For The Winter might be their best yet. The first five tracks blast out of the gate in their best The Argument-meets-Rooney sound; the sixth, "Natalie", is a gem as well, recalling Big Kid and Jellyfish. One high-tempo melodic gem after another. The Riffbrokers-Weight of Line and Intersection. This act from Washington state has always sported one of my favorite band names, and their excellent roots rock has consistently lived up to their moniker. If I could describe their sound in a sentence, I'd say it would be as if Elvis Costello grew up in the Pacific Northwest and fronted The Replacements. "Told You to Go" kicks things off with just the right mix of swagger, definance and yes, riffs; "Evaporate" is another barnburner, "Myth to Struggle With" shows they can take it down a notch and still deliver the goods, "Roy Orbison" pays tribute to the man in their own style, rather than trying to imitate the inimitable, and "End of All Things" is a standout closer. Riff On! 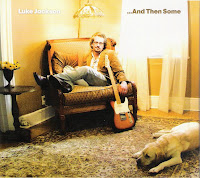 Luke Jackson-...And Then Some. Here's a treat. Toronto's Luke Jackson hooked up with Magnus Börjeson of Beagle and Favorita, and went to Sweden to record this pop gem that will appeal to fans of the aforementioned band as well as anyone who likes smart, sophisticated, melodic pop. "Come Tomorrow" might be one of the songs of the year: an insanely catchy chorus, great melody and just overall pop perfection. The rest of the songs have a tough act to follow, but they come through as well: the laid-back "Trouble" has a fine Josh-Rouse-does-the-70s sound; Jackson dons a Cockney accent in the fun, uptempo "Goodbye London"; "Half a World Away" is a jangly number with definite Swedish influence; and "Longest Day" is a rocking power popper a la fellow Canadian Tal Bachman. Don't let this one slip by you.