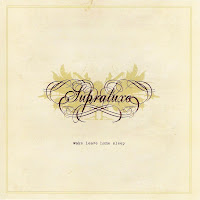 Without Supraluxe, there wouldn't be an Absolute Powerpop. OK, I probably would have found another disc to hype that inspired me to start the blog, but it was in January 2006 that I touted their debut disc to the Audities list, which got them noticed in the power pop community, and which made me think "there are a lot of other deserving artists out there like Supraluxe, and nobody else is really doing a power pop blog". The rest is history, and here we are, the better part of four years later. And so it's come full circle, as the cliche goes, with Supraluxe at long last releasing the followup to their debut.

Wake Leave Home Sleep finds Supraluxe with a more unified sound. Obviously in my view the debut was brilliant, as they veered from propulsive pop tracks like "Blue Sky", "Love Sweet Love", rockers like "Tokyo" and "Run Rabbit Run", and moody melodic numbers that came in somewhere between like "Summer Chalet" and "The Big Comedown". I guess the best way to analogize things is that if we were in the 70s, the first album would be their stab at AM Radio, and this album is their AOR move. It's a markedly different album than the debut, but one that stands worthy on its own. The title track kicks thing off, starting with a gentle, acoustic bent not unlike their hero, Elliott Smith, but steadily builds into a biting rocker as the song's protagonist seems through the humdrum of everyday life. Immediately you know they're on to something more ambitious.

Another touchstone for the band is Steely Dan, and although they don't mimic that band's jazz/rock fusion, they meld some of the Dan's time signatures and sardonic suffer-no-fools attitude into their sound, and the tough-rocking "On the Coast" incorporates some of that late 70s SoCal sound into it. Perhaps the best way to describe it is "free-form pop/rock". Many of the tracks such as "Data Control" and "Oh December" manage to shift within themselves from straight-up rock to a kind of jazzy pop to pure powerpop, not necessarily always in that order. Meanwhile, "Hey Lordy" and "Slow Ephedrine" have the more "traditional" Supraluxe sound of the first album. And "The Big Come On" works as sort of a sequel (or prequel) to the debut's "The Big Comedown".

All in all, it's an impressive step in the band's evolution. While there's nothing as instantly catchy as "Blue Sky" or "Love Sweet Love" here, it's a great headphone album that rewards repeated listens and is an impressive testament to the musicianship of Rich Pearson, Bob Burns and Jim Risser. So make your daily routine in the near future Wake Leave Home (Listen to Supraluxe) Sleep.