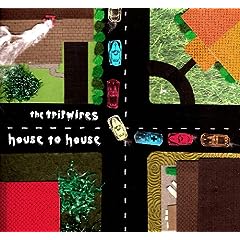 The Tripwires-House to House. There's something about hearing this Seattle band's fun-loving, good-time power pop that brings a smile to my face when I hear one of their tracks. Following up their 2007 debut Makes You Look Around, The Tripwires (consisting of members and former members of The Model Rockets, The Minus 5, and Screaming Trees among others) assert themselves as the 21st Century Rockpile. The opening salvo of "Drawing a Blank" and "(Something in a) Friday Night" will convince you of this comparison, and "Another Planet Now" and "Soundalike" find them at their midtempo melodic best. And I could easily see Nick Lowe (in his heyday) writing a song called "Ned Beatty's in Love". Meanwhile, "Let's Get You Started" could be covered by a band like OK Go without straining, and "Zig Zag" might be their quintessential track. Rock on!

Justin Levinson-Predetermined Fate. In early 2006, Levinson was one of my early "finds" - his debut 1175 Boylston was a bright, fresh and tuneful blast of piano pop that was as good as anything Ben Folds has done recently. Having tackled that subgenre, he mixed in some folk/rock with the piano pop on his 2007 EP Bury Your Love, and with his new disc, Predetermined Fate, the metamorphosis is complete. Going strictly with a rootsy, countryish folk-pop sound, he's made a move not unlike Ben Kweller did earlier this year with his Changing Horses album. Highlights include the pedal steel-drenched "Bandaid on a Bullet Wound", about a marriage gone bad; "Losing You to Tennessee", which sounds like Ryan Adams in country mode; and "Hopelessness", which has a "The Weight"-style melody. Which leaves the question: where is Levinson predetermined to go next?