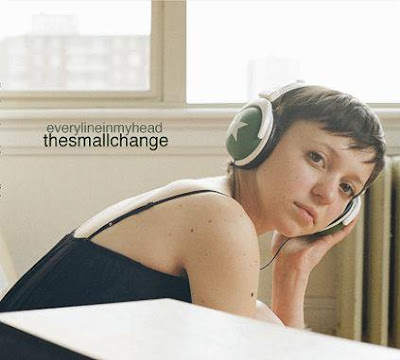 Seattle's The Small Change is back with Every Line in My Head, their third disc and followup to their quality 2005 self-titled debut. They're on Unsmashable Records, and they're kindred spirits with labelmates The Doll Test and The Riffbrokers. In other words, hard-driving power pop with garage and British Invasion overtones. "From the East Coast" gets you right into things with a propulsive guitar riff that underlines their passionate rock sound, while "Droppin' Petals on the Way Down" has an Elvis Costello feel to it. "Downtown in a Restaurant" finds them taking no power pop prisoners, and the title track is 2:10 of first-rate garage rock. Also like The Doll Test, they're not afraid to tackle political themes as "Nothin' 2 Say" and "Yer Torturin' Me" attest, although the songs work as power pop and rock as well.

And the best part of it - you can download the album at their official site, at the mere cost of your email address. If you want to listen before you download, check 'em out at MySpace.
Posted by Steve at 7:22 PM

Many institutions limit access to their online information. Making this information available will be an asset to all.

There is no way I can download it from their website.
Are you sure it was and still is available for download?
Thanks for the amazing job you're doing at abslutepowerpop.