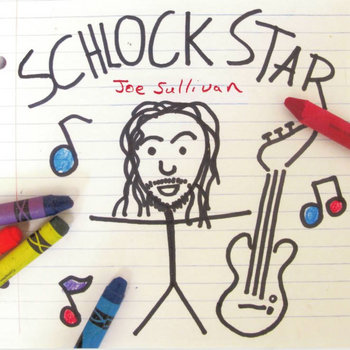 Joe Sullivan-Schlock Star. 2014 has the year of Michigan power pop, with quality releases from The Legal Matters and their constituent members (Chris Richards, Andy Klingensmith). The latest in the pipeline might be the best yet, as Saginaw's Joe Sullivan (with major help from The Legal Matters' Andy Reed) gives us the highly catchy and highly infectious Schlock Star. Opening with the Beach Boys-influenced "Conspiracy Radio", Sullivan displays his pop chops right away, and the "ba-da-da" chorus of "Nurse Tracy" will stick in your head. Elsewhere, the bubblegum pop of "Okinawa Girl" stands side-by-side with the Paul Simon pop of "Sean Patric's Balloon" and the pensive "Look at Me Now", which reminds me of one of Reed's crafty compositions. Star Wars fanatics will enjoy the album closer, "Victims of the Sarlaac", but you don't need to know the difference between Jabba the Hutt or Pizza the Hutt to find it enjoyable. Right now, this is a Bandcamp-only release, but you can get the CD or the mp3s. Willodean-Willodean. One of my favorite discs of 2005, and really of the previous decade, was Randy & The Bloody Lovelies' Lift, which featured piano pop of the highest order with a sophistication not often seen in the genre. The "Randy" in question here was Randy Wooten, who also supplied the husky, pack-a-day vocals that added to the atmosphere. Wooten then dropped off the radar, and there was no followup to Lift. So I was quite pleased to see Wooten resurface with Willodean, teaming up with Eric Holden and Dan Barrett with the latter providing vocals in the same raspy manner as Wooten and the former on upright bass. The result is a soulful melange of pop and Americana with a bit less piano than Lift but a worthy listen nonetheless. From the laid-back vibe of "Pieces" to the late-night cabaret feel of "Ghost Town" to the pop-with-pedal steel of "Oh Darkness", there's a nice mix of sub-genres here. But the real fun to be had here is the catchy "Julie Drinks With Demons", which will have any Bloody Lovelies fan grinning from ear to ear.