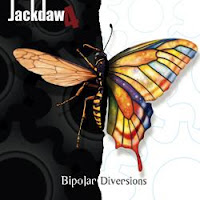 OK, now things are getting serious. There have been a lot of outstanding discs this year, but it's been more depth of quality rather than peaks of quality. In other words, many of the discs that were in my top 20 or so for this year to date would have had a hard time cracking the top 20 of 2005 or 2006. But Bioplar Diversions, the sophomore effort from London's Jackdaw4, should have no problem cracking any year's power pop top 20 or better.

There was a lot of buzz over their first disc, 2004's Gramophone Logic, but I found it a bit inconsistent; here, they reach their full potential with the best Jellyfish-influenced disc since Checkpoint Charley & Sparkwood cracked my 2005 Top 20. They knock it right out of park with "SOOMA (All This Vision)" in which they display a gift for both melody and humor (SOOMA stands for Shines out of My Ass, as in "the sun") along with a nod to Queen. "Frobisher's Last Stand" marries the Jellyfish sound with that of Doug Powell; "Jesus Wants My Soul Back" smacks of music hall McCartney; the title track lives up to its title, with a manic first half followed by a "depressive" and mellow orchestral second half; and "My Little Gangsta" goes for a more glam sound and reminds me of the Class Three Overbite disc. But that's just the first half of the disc. The second half is just as good, especially "Illuminati", which will have you swearing that Sturmer, Falkner, Manning & Co. really have reunited under a different name.

Many recent bands have tried to make a "Jellyfish record", but have only succeeded with a track or two or three. Jackdaw4 have truly done it here, creating a record that is more than the sum of its parts or its influences. It's kind of ironic that Andy Sturmer was the driving force behind LEO, as Alpacas Orgling was a pitch-perfect homage to ELO that stood on its own as a great album, and here we have Jellyfish essentially receiving the same treatment.

The disc is officially out in ten days, but Kool Kat said a few days ago that they have it enroute, so if you place your order now you shouldn't have to wait that long. In the meantime, sample some tracks at their MySpace.

UPDATE: Not Lame is all over this one as well, and they're offering three bonus tracks as well (per Bruce), so keep checking this link as well.
Posted by Steve at 1:16 PM