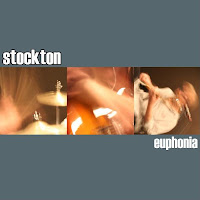 At long last, here's the debut CD from Stockton, who teased us with the brilliant "Dreamworld" last summer on their myspace page. For those who need a refresher, Stockton is 2/3 of the late, great Cotton Mather (guitarist Whit Williams and drummer Dana Myzer) plus ex-20/20 member Ron Flynt. Along with former Mather frontman Robert Harrison's Future Clouds and Radar, we now have two Mather-related projects available in the same year after a six-year drought since 2001's The Big Picture.

Mather comparisons are inevitable here, and it doesn't hurt that Flynt isn't that different vocally from Harrison. But I always thought that Williams was Mather's secret weapon; normally in power pop, guitar virtuosity takes a distant back seat to the song, but Williams is one of the rare power pop guitarists who has his own distinctive sound (just think of "My Before and After" and "40 Watt Solution" for instance), and this makes Euphonia more the "new Cotton Mather record" than Future Clouds and Radar (which was no slouch either). His mark on the disc becomes apparent very early, with the extremely strong opening quintet of "Free Drinks", "My Foreign Legion" (there's a Matheresque title if I ever heard one), the aforementioned "Dreamworld" and "Pipe Dream Blues", several of which feature harmonies sung over Williams' Revolver-like guitar play, almost like a mash-up of "Because" and "Rain". In fact, these four tracks as a unit trump any combination of four tracks from The Big Picture (unless it's "40 Watt Solution" played four times).

Which is not to imply that there's a cliff-like drop-off after the first four tracks. "See Rock City", "Lowbrow", and "Make It Right" would be the highlights of most band's albums, and here they're fighting for fifth place. And album closer (not counting the "Dreamworld" reprise) "Night Is Over" is an altogether different treat, sounding nothing like Mather but instead like kind of a laid-back "Brandy (You're a Fine Girl)". To make a long story short, we have another top 10 of 2007 contender on our hands here.