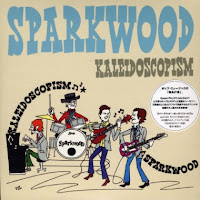 I normally don't like to post too much on discs that aren't readily available in the USA (and much of the world) but I do make exceptions when the situation warrants, and now that I have finagled a copy, it's time to extol the virutes of Sparkwood's Kaleidoscopism.

If you're familiar with the Texas band Sparkwood, it's no doubt due to their great 2005 disc Jalopy Pop, which made my 2005 top 20. Kaleidoscopism is cut from the same cloth, falling somewhere between the pop smarts (and smart alecks) of Fountains of Wayne and the effervescent vibe of Jellyfish with touches of Queen and ELO. In fact, their sound can almost be summed up by a single song: Queen's "Good Old Fashioned Lover Boy", a cover of which they've thoughtfully added to the disc as a bonus track.

The opener "Welcome" isn't a 30-second introductory track but rather nearly 5 minutes of what could be described as the Beach Boys meet Jellyfish. "Ooh Sha La" sounds like what its title implies: a bouncy, peppy number that will stick in your head. But as earworms go, nothing here tops "The Bop Bop Song", another title that speaks for itself and where the Jellyfish comparison is most apt. And they pull off the slower numbers with aplomb as "Glaze In My Eye" and "Days Ago" close the disc (at least the proper non-bonus portion of it) in fine fashion.

But as I alluded to in the opening paragraph, there's a catch. Kaleidoscopism was only released in Japan, and frontman Bart Padar informs me that there is no domestic release planned at this time. So if you want it, you'll have to shell out import prices. But I've done the dirty work for you and found the cheapest US price on the net, $20.73 plus shipping from an eBay seller - not cheap by any means, but better than the $30-35 it's going for at Amazon and CD Universe. I can say that if you loved Jalopy Pop, you'll feel you're getting your money's worth, and given the time of year perhaps you can get someone to buy it for you as a Christmas present. In the meantime, you can stream three tracks at their MySpace.
Posted by Steve at 2:08 PM

I really enjoyed the music and love checking out new music all the time. If you are up for some new music, check out Jason Soudah.His EP, Six Hours, was produced by Romesh Dodangoda who also worked with Kids in Glasshouses, The Blackout and Dopamine. He also recently appeared on national UK TV via ITV One’s “This Morning” & On BBC Radio 2’s Janice Long Show. Let me know what you think of his music:www.myspace.com/jasonsoudah