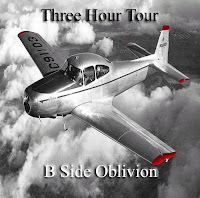 Now here's a blast from the past. Darren Cooper and Three Hour Tour have actually been around since 1989, but have been dormant for the last 10 years (stuck on Gilligan's Island, perhaps?). So it was a nice treat to see them release B Side Oblivion early this year. Despite the title, this isn't a collection of B-sides, rarities, etc. - it's 10 new power-poppin' tracks.

Cooper really enlisted the help here - Adam Schmitt plays bass, and Velvet Crush's Paul Chastain and Ric Menck add bass and drums, respectively. If you're a fan of Schmitt or Velvet Crush (or a fan of quality power pop at all), this one's a must-get. "I Wanted You Around" has just the right measure of guitar crunch and melody that reminds me you why power pop is your favorite genre; "A Girl That I Once Knew" is the kind of midtempo track you'd get if you combined Badfinger and Eric Carmen; the slide guitar that propels "Lonely Place" along is worth the price of admission; the title track recalls Tom Petty's Wilbury-era stuff; and "Easter Basket Grass", while likely being the first song ever to mention the product, is also a great rocker. It continues to get easier and easier to come up with an early Best-of-2008 list.