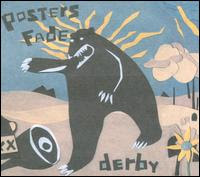 Expectations can be tough, especially in the world of music. "Second Album Syndrome" (SAS) is a well-known (12,700 Google hits for the phrase in quotes) affliction for artists who put out a dazzling debut disc, only to have album #2 disappoint fans and critics alike. Enter Derby. Their 2005 debut, This Is The New You, was my #1 disc that year, and an instant all-time favorite of mine. How could they possibly live up to that (at least in my eyes) on the followup? Well to be frank, they don't. But Posters Fade is 85-90% as good as New You, so I'd say they've safely avoided SAS, and while they may not challenge for #1 on my year-end list in 2008, the top 10 is a distinct possibility.

Most of what was great about the debut is present here. The great melodies are there, Nat Johnston's vocals are perfectly matched with the material (for those unfamiliar, he comes across a huskier-sounding Joe Pernice or a less histrionic Ed Roland), and the quieter moments again sparkle. The primarly stylistic difference is subtle - overall, the disc shades a bit more toward indie pop than power pop. Not that New You was Fountains of Wayne or anything, but Posters Fade is a bit less Beatlesque. Like the debut ("Jet Set" into "Qualities"), Posters opens with a gently strummed acoustic number that segues into a louder, faster-tempo track as "Why Don't You Do It?" leads into "All or Nothing", a great track with more BPM than you've heard before in a Derby track. The lovely "Only What's She Selling" follows with its "don't feed the bear" refrain (not to be confused with the later bookend track actually titled "Don't Feed The Bear"), and "Stop Stalling" and "Hopes" are excellent examples of how well Derby can do power pop and are sonic cousins to some of the debut's great tracks like "Pay No Mind" and "One Reason".

Elsewhere, "If Ever There's a Reason" (a holdover from their interim EP) is an acoustic number that sports an infectious drum-and-handclaps backing and has a bit of "I've Just Seen a Face" in it. "Streetlight" (also an EP carryover) is another choice cut with its driving beat, tasteful synths and a fine melody. "Michigan" is a quality rocker, and "As My Own" is a real standout, coming in as a bit of a cross between Nirvana in their quieter moments and the Alan Parsons Project in their less prog-rock moments (Johnston reminds me a bit vocally of Eric Woolfson at times as well).

So while this isn't New You II, there's no shame in that, as Derby have crafted a followup that stands on its own and bodes well for the band's future.