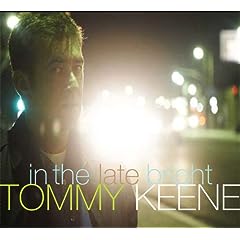 The release of a new Tommy Keene album has been a reason to celebrate in the power pop community since 1984, and remains so in 2009. For the most part, In the Late Bright doesn't deviate significantly from his established sound so you're getting a known quantity here. But there's a darker edge to the proceedings, from the album cover to the song titles ("Nighttime Crime Scene", "Hide Your Eyes") to the lyrics, giving the album a "power pop noir" feel.

Keene announces that he "cannot feel any more" on the brief opening title track, which segues seamlessly into the next track, "A Secret Life of Stories", a perfect example of his trademark gritty power pop that nevertheless throws some "Penny Lane"-style horns (I think they're horns) into the cacophonous mix at the end. "Tomorrow's Gone Tonight" is vintage Keene as well, a jangly number that probably has the most upbeat lyrical content on the disc.

One of the more interesting (yet brief, clocking in at 2:05) tracks is "Goodbye Jane" which manages to come across as a bit of a cross between "Tumbling Dice" and "My Sharona", mixing Exile-era Stones honky tonk piano with an insistent power pop beat. The aforementioned "Nighttime Crime Scene" is next with a bit of an epic feel, complete with a haunting piano hook and a serious dose of melancholy, which then leads in to "Elevated", a 5-minute electric guitar instrumental that serves in a sense to reboot the album as "Realize Your Mind" follows with the energy and buoyancy of an album opener.

All in all, In the Late Bright shapes us as one of Keene's best albums to date, which is saying something given his track record.