CD of the Day, 2/2/09: The Tomorrows-Jupiter Optimus Maximus 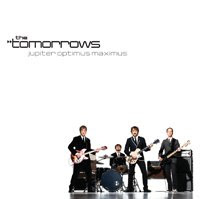 Old school power pop fans will no doubt remember the 1996 self-titled release of the Vancouver band The Roswells as one of the better releases of that decade, and it was included in Top 200 Power Pop Albums of all-time as compiled by John Barack in his Shake Some Action! tome. In recent years however, they've been shrouded in almost as much mystery as the town from which they took their name. Wonder no more, as The Roswells' primary singer/songwriters Marc Stewart and Scott Fletcher have returned to form The Tomorrows, and their debut album Jupiter Optimus Maximus is out this week on Kool Kat.

Stewart and Fletcher take the Roswells template and build it on with a more expansive, crunchier sound without sacrificing the melodies that drove that band. "Effortless Lee" opens the disc and clocks in at just over five minutes - not a problem, though, as its a Big Star/Raspberries-style mashup that never wears out its welcome. "Love is Dead" throws a bit of Queen into the mix, and the necessarily spacey title track recalls countrymen The High Dials. Elsewhere, "Don't Worry About Me" channels Velvet Crush, "Such a Shame" demonstrates their facility with midtempo janglers, and the geek-rock of "Anime" is endearing. Closing things is the 6-minute epic "Remember", which fits the spirit of the album.

With the first great power pop disc of 2009, R.I.P. The Roswells, and long live The Tomorrows! Grab it from Kool Kat and they'll send you a 4-track bonus disc that includes a cover of "And Your Bird Can Sing".

Labels: The Roswells, The Tomorrows

Brilliant release. This will be the template that all future Power Pop albums will be based on!!