Actually, "major label" is a bit of misnomer (these releases haven't been featured in your latest Best Buy ad), but these are well-known acts with big-time distribution, so we'll use that particular shorthand here. I've been meaning to weigh in on these three for a while, so better late than never: 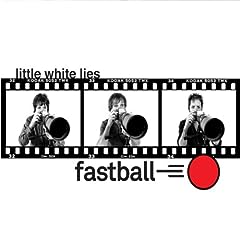 Fastball-Little White Lies. Fastball needs no introduction to those who read this blog, so the operative question here is how does it stack up to the rest of their catalog? And the answer is "quite well". In fact, song for song this might be their best ever, even if there isn't a "The Way" or "Fire Escape" on here. Frontmen Tony Scalzo and Miles Zuniga team up for the effervescent "All I Was Looking for Was You, while Scalzo pens a sequel of sorts to "The Way" with "The Malcontent (The Modern World)" wondering if the former is "still saying anything to you" while lamenting the disposable pop that pushed "The Way" and its like off the radio at the turn of the century. Zuniga is the purer popper of the two and his highlight here is hyper-catchy "Mono to Stereo", which is right up there with classics of his like "Fire Escape" and "Airstream". A welcome return from these veteran Texas power poppers.

Tinted Windows-Tinted Windows. Also getting a lot of publicity lately is power pop supergroup Tinted Windows, consisting of Taylor Hanson (from Hanson), Adam Schlesinger (Fountains of Wayne), James Iha (Smashing Pumpkins) and Bun E. Carlos (Cheap Trick). It doesn't get much better than that on paper, but on disc the whole is a bit less than the sum of its parts. Don't get me wrong - this is a fun, catchy power pop album. But it's fairly generic for the genre, although I can see this being the power pop album for people that aren't that big into power pop, given the names involved. "Kind of a Girl" is pretty catchy, with its "whoa-whoas" in the chorus, the Cheap Trick-esque power ballad "Back With You" and the driving "Without Live" are the highlights here.

Superdrag-Industry Giants. When John Davis put an apparent end to Superdrag after becoming a born-again Christian in the wake of 2002's brilliant Last Call for Vitriol, it appeared that we'd never heard from them as a band again. But seven years later, Davis reformed the band and it seems as the goal here is to make up for the absence by rocking harder and louder than ever, no small feat for a band that was already one of the harder-rocking power pop bands around. Unfortunately, though, they've sacrificed some melody in the process, making Industry Giants an uneven affair. "Slow to Anger" demonstrates this right off the bat, a three-chord rant that's pretty hookless. The ship is righted a bit with the melancholy "Live and Breathe", recalling the Superdrag of Vitriol, and "I Only Want a Place to Stay" takes an equally satisfying less-is-more approach. But most of the rest of the disc comes up kind of short in the memorable melody department, making it a good candidate to cherry pick downloads from.