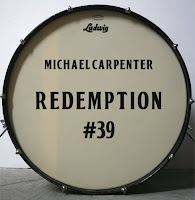 Here's some good news to brighten up your back-to-work-from-a-long-holiday-weekend morning: Michael Carpenter is set to release his first solo album since 2004's Rolling Ball - and you won't have to wait long for it. Redemption #39 will be available on June 8 from the usual suspects (Not Lame, Kool Kat, Jam). Much as Carpenter has done with previous releases (such as Rolling Ball and the Supahip album), he'll be offering a limited edition bonus disc containing a stripped-down, acoustic version of the album, so get it early.

Here's a video for the album's opening track, "Can't Go Back":