Time to resume things with a look at a couple of EPs and a CD single, two of which come from familiar names: Scot Sax-While She Was Working. Most of you know the Wanderlust and Feel frontman, and the quality LA pop he's been responsible for in both incarnations. This EP, however, is a bit of a departure. A good one, though. As Sax himself says, he felt he should have changed him name to Rodriguez after the sessions, and there is a definite Latin/urban feel (pardon the pun) to these tunes. "Bad 4 U" starts off in familiar territory then veers away; "Not Today" sounds like the work of a different but interesting artist, sort of Alejandro Escovedo meets Beck. Check out the samples. CD Baby | MySpace Wild Bores-ReIntroducing Wild Bores. Wild Bores is Nashville-via-Chicago's John Whildin, and the sound here captures a mix of both of those cities: roots rock with a midwestern feel. The four tracks here are all outstanding in a Summerteeth-era Wilco kind of way, albeit a bit less ornately produced. A year-end EP contender, subject to being superseded by the scheduled full-length which is supposed to include these four tracks. CD Baby | MySpace 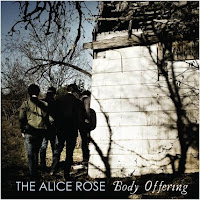 The Alice Rose-Body Offering (single). The Alice Rose burst onto the scene with their fantastic 2006 disc Photographic Memory, and they're getting to ready to release the followup. In the meantime, they've made available the first single from the disc, "Body Offering". It's a fine track, in the same Jon Brion-meets-Squeeze style that we saw on the debut. The b-side, "Wear That Cross", is no throwaway either. Get the single on iTunes.