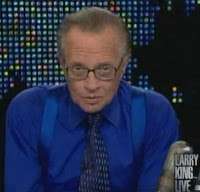 I have a bunch of stuff to comment upon, but not enough to devote a full review to, so in the spirit of Larry King's old "dot dot dot" USA TODAY columns (complete with random, off-topic remarks and parodied mercilessly by The Onion), here goes:

If you loved Big Star's "Thirteen" and wanted a whole album that sounds like that, you could do worse than Whiskey Priest's Hungry...Speaking of hungry, I could go for a corned beef sandwich right about now...The new Phantom Planet disc: I don't get it...How about those Devil Rays? three-game sweep of the Red Sox...I know I'm late to the game, but I finally picked up John Borack's "Shake Some Action" book. It's awesome, and guess which blog is at the top of the list on page 167?...Speaking of Shake Some Action, the Seattle band by that name has a free download ("Looking For Someone") from Sunny Days Ahead, the upcoming followup to their self-titled debut...George Carlin was right: everyone who drives faster than you is a maniac, and everyone who drives slower than you is an idiot...He sounds nothing like his dad, but the new Jordan Zevon disc is quite good...One of these days, I'm going to work "I Drink Your Milkshake" into one of my reviews...You can stream the new Sloan disc here; my initial reaction is better than Never Hear The End of It, but maybe that's just because this one is only 13 tracks unlike Hear's 30...Which reminds me - for someone who listens to the iPod on random play like me, discs with more than 13-14 tracks on them are a bit of an annoyance as they tend to monopolize my listening...For example, I liked the recent Tim Morrow disc, but it has 22 freakin' songs on it. Every time I turned around, it was like "Tim Morrow again?"...I'm looking forward to the new Old 97's record, but I hope it doesn't suck like Drag It Up, where it seemed the rest of the band made was making Rhett Miller confine all his pop instincts to his solo discs...how about that Roger Clemens?
Posted by Steve at 1:37 PM