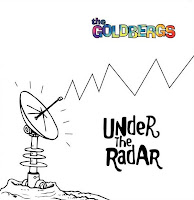 About a year and a half ago, The Goldbergs truly were under the radar. Out of nowhere, Andy Goldberg's debut Hooks, Lines & Sinkers came across as one of top power pop albums of 2006. As a result, at this point The Goldbergs certainly are on the radar of any savvy power pop fan; so while the followup to Hooks, Under The Radar, may not take anyone by surprise, there's no sophomore slump in evidence here.

Picking up where its predecessor left off, Under The Radar is 11 winning tracks of power pop in the style of Marshall Crenshaw, Eugene Edwards, Badfinger and Nick Lowe. Also like its predecessor, there are no weak tracks, but some are more equal than others: opener "Please Won't You Please" with its anthemic-yet-poppy final 60 seconds or so; the Michael Carpenter-like "Fool The Sun"; the lovely sway of "Water Blue"; the Merseybeat-influenced "Better Times"; and "I'm a Hero (Waiting to Happen)", which sounds like it could have come from Edwards' My Favorite Revolution. Hearing a followup of this quality is quite gratifying - it leads me to believe Andy Goldberg has become the type of power pop artist that will reliably release quality albums every couple of years for the foreseeable future.

If you're going to (quite sensibly) pick this disc up, make sure you do so at Kool Kat, where you also get a 5-disc bonus CD with 4 outtakes from the Under The Radar sessions (better than most folks' intakes) plus a cool cover of "Somewhere Over The Rainbow".

MySpace
Posted by Steve at 1:27 PM

Yep, a really great-sounding record. I only just heard about it today through a power pop friend of mine.

Just a small edit (this has always bugged me; sorry): the name of the song is "Over the Rainbow". Thanks.