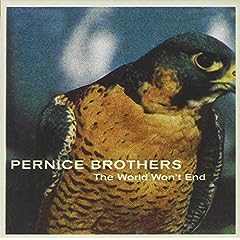 Back in 2001, my favorite artist was shaping up to be Ryan Adams (this was before he became a parody of himself). His solo release Gold and the delayed release of Whiskeytown's swan song, Pneumonia, were 1-2 (or 2-1) on my best-of list that year. But around October, I discovered the Pernice Brothers and The World Won't End, and there was no looking back, and there still isn't - this is my favorite album of the new century to date as well as for 2001.

For anyone who's been introduced to the Pernice Brothers through their last two albums and hasn't gone back and listened to this one, you're in for a pleasant surprise. Last year's Discover a Lovelier You was maddeningly twee, and 2003's Yours, Mine and Ours was solid but not truly outstanding. The World Won't End, though, is about as perfect as power pop gets in my book. The dominant influences on this one are the Zombies (Pernice's Colin Blunstone-like vocals), the Beach Boys, the Beatles and a touch of Bacharach.

The lead track "Working Girls (Sunlight Shines") gets things off to a rousing start, with its insistent guitar hook and pristine melody. And while the power pop genre isn't known for its particularly insightful lyrics, this isn't a problem with Joe Pernice. Throughout the album, Pernice's sunny, breezy rockers mask dark, almost depressing lyrics about serious themes. In this track, Pernice's female postgrad struggles through a temp job while "contemplating suicide/or a graduate degree".

Next up is the driving Brian Wilson-influenced "7:30", complete with a Mamas-&-Papas-ish "ba-ba-ba-ba" break in the middle eight, despite the "There's nothing there/just bitterness" refrain in the fade-out. This track is followed by the disc's real triumph, "Our Time Has Passed". As the title intimates, it's a breakup song. But it transcends the usual breakup song cliches with lines like "hiding out from the winter sundays/sleeping past the crack of noon", "i'm in love with the way i'm shaking", and the comparison of the doomed like to a "flash of radiation/that leaves the buildings where they stand". But all the literate lyrics in the world aren't worth much without a great melody behind them, and this song has it as well, complete with swelling strings.

Meanwhile, the hits just keep on coming. "She Heightened Everything" jangles along while being the first pop/rock track I've heard to feature the word "moribund", "Bryte Side" mines the failed relationship territory as well ("I hope I never love anybody/the way we never really tried"), and "Let That Show" is a real treat, complete with (almost) cheesy 70s keyboards and answering guitar riffs.

After the tour de force of these first six tracks, the album does come down a bit from the stratosphere, but the remainder is hardly filler. "Flaming Wreck" rocks out as Pernice contemplates his death in a plane crash (did I mention the lyrics were dark?), and despite its enigmatic title, "The Ballad of Bjorn Borg" is beautiful pop as well. And for all the orchestration and bells and whistles of the preceding tracks, things close on a simple note with the pretty ballad "Cronulla Breakdown", which has a bossa nova feel.

Sample it at Amazon. There's a goofy video for "Working Girls" available on their site. And reason #345,430 to subscribe to eMusic: they have it. If this one isn't in your collection yet, you need to make room.
Posted by Steve at 11:03 AM