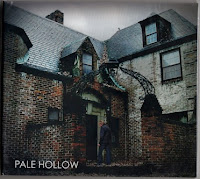 Now here's an exceptional disc. Pale Hollow is Cleveland's Michael Allen and he recorded this album in Detroit, but don't be fooled - this is the sound of the English Midlands rather than the US Rustbelt, and he's given us a tasteful disc of the highest craft. Think Muswell-era Kinks as interpreted by Teenage Fanclub with an attention to craft and detail, and you have an early Best of 2008 favorite (Yes, the disc came out in December of 2007. So sue me.)

"Don't It Leave You Lonely" opens the disc and gives you a great idea of what you're in for the rest of the way. Coming down like a great lost Laurel Canyon 70s-era track, its breezy melody and midtempo beauty let you know that a pro is at work. "Sugarcane" follows with a more rocking sound, almost Neil Young-ish in parts but with a wonderfully melodic middle eight that will leave you humming. "Let the Change Begin" almost sounds like a grown-up Oasis; "Roll The Stone Away" reminds me of prime Peter Bruntnell; "Satisfied Mind" is excellent folk-rock in a Donovan-meets-Al Stewart manner, and "Soul Explosion" would make Ray Davies proud.

A very pleasant surprise indeed, and kudos to Kool Kat for unearthing this gem. While it may not appeal to the under-35 crowd, music fans of any age would be well served to add this one to their collection.

NOTE: The four tracks at MySpace are downloadable, although it's hit or miss at the moment.
Posted by Steve at 2:30 PM