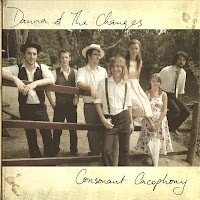 Danna & The Changes is a new band from Australia, and their debut release Consonant Cacophony marks the third in a trilogy of outstanding recent releases from the Popboomerang label. Unlike the other two, there's a bit more of a front porch rather than pop studio feel, but to paraphrase the famous SPCA movie disclaimer, no melodic content was sacrificed in the making of this album.

Consonant Cacophony runs the gamut of alt-country, folk/rock, and yes, power pop, and Danna & Co. manage to make it sound like they've been doing this for twenty years. "Baby Love" jumps out of the gates with its "Lust For Life"-beat over a raucous melody; it's almost as if Ryan Adams were fronting The Strokes. "Good Duet" steps into what could best be described as Exile-era Stones territory, but only brighter. Another bright spot is the piano-based "He and She", which manages enough country swing and pop smarts to make Walter Clevenger proud.

Elsewhere, they branch out into Brian Wilson balladry with "He Was Irrelevant", have a hoedown with "Janie", venture into more traditional power pop in "Shake It Up", and try their hand at cowpunk with "Rise and Shine". By the time they wrap things up with the anthemic "Station", there's only one conclusion to draw: this is the roots-rock album of the year so far.

Labels: Danna and The Changes