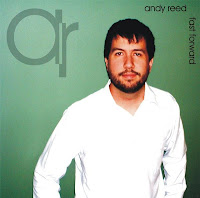 Many of you may not know Michigan's Andy Reed, but those who snagged his 2006 debut EP The Great Compression certainly remember him, and now that he's released his first full-length the power pop community is going to take notice. The EP was quite good, but it didn't prepare me for how stunningly good Fast Forward is. If your tastes run in the Jon Brion/David Grahame/Emmit Rhodes/Elliott Smith area, just go ahead and click on the links below.

Two other albums that spring to mind here are the recent Adrian Whitehead disc and Braden Blake's A Year In Pajamas from 2004, pure pop with a sophisticated edge and pristine melodies. "The Ballad of...." kicks things off, and it's about a perfect an opener for this kind of sound as it switches between Brionesque balladry and Beatlesque bop without missing a beat. "Crazy Things" is a lush, string-laden number that calls to mind Jellyfish's quieter moments, while "The Criminal" and its breezy feel is Joe Pernice-meets-Paul McCartney country. "Novacaine" is as languid as its title may imply, but that doesn't mean this beautiful ballad will put you to sleep.

Meanwhile, the tempo picks up mid-album with "Thank You", a high-quality traditional power pop number in the vein of Michael Carpenter, and the Cars-like synths and distorted guitars of "Tied Up". "Around the Town" is a jaunty acoustic guitar-and-honky tonk piano number that boasts another of Reed's signature melodies, and the disc ends where it began with "Are You Listening?", another fine Brion/Beatles-influenced track that concludes with some outstanding guitar work. There's a good chance I'll be making room in year-end top 10 for this one, and you should be making room on your CD shelf as well.

I have this CD. I enjoy it alot along with his previous CD's

I got a copy of " Fast Forward " from Andy himself and it is truly amazing...he is a true artist and one of the nicest people you will ever meet...since I got the cd ..it hasn't left my cd player