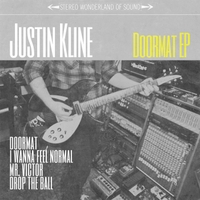 
Email newsletters for bands at ReverbNation.com
Posted by Steve at 3:02 PM No comments:

Favorite of the site and all-around good guy Justin Kline has a new EP out, titled Doormat. It's available from NoiseTrade, which means you can download it for free but you can also do the right thing and throw him a few bucks so he can keep making these EPs.

Perhaps the most anticipated release of 2013 to date has been Andrew Curry's "Monsters of Lite Rock" project, funded by Kickstarter, to assemble a compilation of those sort-of-cheesy "lite rock" (also known as "yacht rock") hits of the late 70s and early 80s covered by today's power pop artists. The Kickstarter was successful, and the fruits of Curry's (and the artists') labor is here with the double-disc, 28-track Drink a Toast to Innocence. The lineup Curry has assembled is impressive, featuring the likes of Bleu, Mike Viola, Willie Wisely, David Myhr, Michael Carpenter, Linus of Hollywood, Seth Swirsky and so many more of my (and your) favorite artists.

As with most covers compilations, Toast features the usual mix of faithful re-creations and bold re-imaginings. To what degree you prefer either is always affected by the level of your fondness for the original and the covering artist, but there are plenty of each to choose from here. To me, however, my favorite covers have fallen into a third category: covers that sound like they could have originals by the covering artist. In other words, they make the cover their own. The two here that stand out in that regard are Greg Pope's cover of Poco's "Crazy Love" and Lannie Flowers' version of the Orleans staple "Dance With Me". In Pope's case, it's a great match of cover and artist; by taking the original and speeding it up just a microsopic bit it sounds like one of his typical slightly off-kilter pop gems, while Flowers turns "Dance With Me" into one of his usual rollicking (and rocking) power pop numbers by adding a honky-tonk piano to the mix in contrast to the highly laid-back original.

In the re-imagining department, there are several standouts. The Davenports turn Randy Van Warmer's borderline treacly "Just When I Needed You Most" into a driving power pop track, Lisa Mychols speeds up the David Soul (of Starsky & Hutch fame) ballad "Don't Give Up on Us" and gives it the full-band treatment, while Willie Wisely takes the sexual subtext of The Atlanta Rhythm Section's "So Into You" and makes it the text, complete with moaning female vocals in the outro. Also rocking things up a bit is Vegas With Randolph and their version of Little River Band's "Cool Change". Plus I give them credit for keeping a straight face while singing lines like "The albatross and the whales/they are my brother".

As for the faithful covers, there are plenty to choose from here. Kyle Vincent, whose style is pretty much 70's lite rock and would be a natural to cover any of the songs featured here, is perfect on Ambrosia's "How Much I Feel"; ex-Merrymaker David Myhr captures the spirit of 10cc with "The Things We Do for Love", and the two halves of The Red Button play to their strengths - Mike Rukeberg with the power poppy "Believe it or Not" (theme from "The Greatest American Hero") and Seth Swirsky's eerily channels Henry Gross almost note-for-note on "Shannon", the ultimate tear-jerking dead dog song. Boston buddies Bleu and Mike Viola take on "Baby Come Back" and "Steal Away", each of which sound exactly you'd hear them in your head singing these tracks, but I'll give Viola kudos for starting to sing "What a Fool Believes" at the end of "Steal Away", since the latter was pretty much a rip-off of the former.

Ironically there's no cover here of "Same Old Lang Syne", the Dan Fogelberg lite rock classic from which the title of the compilation derives. Curry has said it was on the list of songs submitted to the artists to cover, but nobody took it up. Hmmm...sounds like an opening for a Volume 2. The lack of Fogelberg notwithstanding, this is without doubt the best covers compilation since Not Lame's Right to Chews from 2002, which had power poppers covering early 70s' bubblegum classics, and it deserves to be highlighted outside the immediate power pop community.

I don't normally review singles but I'll make exceptions from time to time for artists previously featured on the site, and Goodman is one such exception. On the heels of his fine full-length What We Want, he has a two-song release ("Use Me"/"Dawdling") available now on Bandcamp at "name your price". The first track is not a cover of the Bill Withers classic but instead a new composition, as is "Dawdling", and they're both in the vein of the "jumpy power pop" that characterized What We Want. So if you liked that album, you know what to do here.