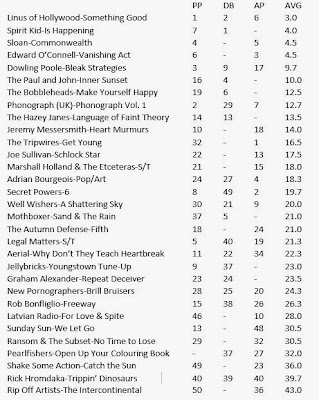 A quick look at several releases I've been enjoying recently:

DC Cardwell-Pop Art. Aussie DC Cardwell returns with the follow-up to 2011's Some Hope, and brings us another round of mild-mannered, Beatlesque pop. Favorites: "In the Cloud" (where you can get this release), "Magic for Everybody" (a piano-pop gem) and "Record Store Day" (an ode to the old-school way of buying music).

Greg Hoy-The 21 Day Myth. Greg Hoy has been a pop chameleon throughout the last decade, releasing numerous albums with styles as varied as straight-up power pop, Sun Records-style rockabilly, and near-heavy metal. This time around he's gone with groove, with the results resembling the minimalist-yet-melodic beats of Spoon. "The Talk Goes Stiff" and "Fiend 4 Your Soul" are the standouts here.

Antony Plain-Continuing on My Plan. I don't know much about England's Antony Plain, but his newest release caught my ear. It also caught my eye, as Plain looks a bit like John Lennon on his album cover but it's songs that warrant mention here, a mix of 60s and 70s power pop styles from the groovy rocking opener "Invisible Man" to the midtempo "Truth is Closer" to the string-laden "Boy". (Note: the album is streaming in full at the CD Baby link below)

Steve Baskin-Dead Rock Star. This Atlanta-based singer-songwriter is back with his third album, and this one is the best of the lot. It has a "big" sound, with big hooks and big melodies that remind me of fellow Atlantan Butch Walker. The opening 1-2 punch of "Single Thing About You (Chinchilla)" will leap out of your speakers, and Baskin has some facility with a ballad too ("Nobody Died Today"). Plus there's a pretty good cover of "Killer Queen" thrown in the mix. One of 2015's early best.


Free music player widget at ReverbNation.com
Posted by Steve at 6:07 PM No comments: