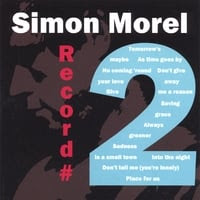 Last year, one of the first discs we featured on this blog was Simon Morel's Songs From The City, and the Australian is back with his second disc, Record #2 (the time spent coming up with that album title must have been incalculable). #2 is a bit different than Songs From The City, feauturing a little more harder-edged pop sound than its predecessor courtesy of production from the legendary (in power pop circles) Michael Carpenter.

Carpenter's production is apparent right off the bat with the power pop gem of an opener, "Tomorrow's Maybe", and the rock of "As Time Goes By" (not a remake of the Casablanca standard). Other uptempo standouts include "Don't Give Your Love Away" and "Sadness In a Small Town", possibly the catchiest track on the disc and featuring great harmonies on the chorus. Fans of Morel's softer side won't be disappointed either; "No Coming 'Round", "Saving Grace" (co-written with Carpenter), and the closing "Place For Us" are all high-quality ballads.

Stream a few tracks at his official site, or at his myspace. And of course you can check it out and buy here: