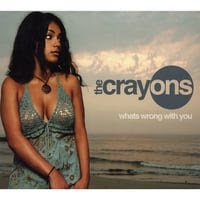 Two reasons I'm reviewing this disc: first, it's a quality release from a power pop band with a track record, and secondly, there's a hot babe on the cover and maybe that will drive some extra viewers to the site. OK, it's mostly reason #1 since the pleasures derived from the site are supposed to be auditory, not visual. (Side note: when Googling this disc for some background, one of the first hits I came across was something about a puppy that ate a box of crayons. If you click the link, it was "answerer no. 9" who used the magic search phrase).

Anyway, enough digressions. The Crayons are a 4-piece band from Albany, New York who put out the most excellent What Color Are You? several years back and are now here with the followup. Like the previous release, this one was produced by The Churchills, and if you're a fan of that band, you'll love this one. But even if you don't know The Churchills from The Stalins, there's a lot here to like. Opener "God Hates Me" sounds like The Posies crossed with solo Paul Westerberg; "Unlucky Charm" is a fine midtempo number that earns some of the Del Amitri comparisons they've received; "Here and There" adds some britpop to the formula; and the driving, anthemic "Sliding" should go right onto anyone's iPod. So if you're not interested in power pop that's almost as hot as the babe on the cover, I have to ask "What's Wrong With You?"

Very Good Stuff!
I hear some similarities to Duran Duran too, and I mean that in the best possible way.