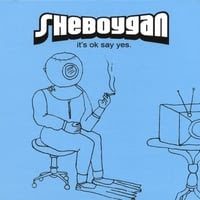 First things first. Sheboygan is not from Sheboygan, Wisconsin. (Or as the English would say, Sheboygan are not from Sheboygan, Wisconsin. Why is it that the English treat singular nouns that refer to a collective entity, such as a sports team or musical group, as plural when it comes to subject/verb agreement? I'll never know). They're actually from Austin, Texas, but what Sheboygan lacks in geographic accuracy they more than make up for with great power pop, as their full-length debut It's OK Say Yes realizes the promise of their 2004 self-titled debut EP, itself an overlooked gem.

One thing Sheboygan has going for them on this disc is that they feature two equally talented songwriters, always a good thing in a band (cf. Sloan, Fastball, XTC and some guys called The Beatles). Here it's Chris Gebhard and Cory Glaeser. Glaeser, who wrote all the songs on the debut EP, is the more traditional power-popper of the two: alternating crunchy-guitar based numbers a la Matthew Sweet such as "The Stars and the Moon" and "Got No Game" with piano and keyboard-based tracks like "Everybody Knows" and the absolutely fab "Birth of Venus". Gebhard, meanwhile, has a more languid pop sound: "Star Child", "Dream" and "I Got So Sleepy" are Cloud Eleven crossed with Jellyfish, while "Time Machine" has a jangly, Teenage Fanclub sound. The combination of the two (who generally alternate tracks on the disc) makes for an outstanding album and an early best of 2008 contender. If they keep making discs like this, they can call themselves Yeehaw Junction for all I care.