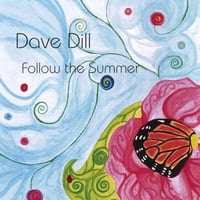 With the weather beginning to warm and the daylight lasting longer (at least in most of the world), it's the perfect time for a new release from Dave Dill. His previous disc, 2005's See You In The Sunshine, was a real treat, and Follow The Summer may be his best yet. Falling somewhere between Brian Wilson/Wondermints and Jon Brion on the pop continuum, Dill has the art of sunshine pop down to an exact science.

Rather than go track by track myself, whoever wrote up the summary at his CD Baby page did a better and more thorough job than I could do, so I'm going to quote:

“Perfect There” features Dill’s innate ability to balance exemplary songwriting with highly creative instrumentation. The song features a surreal acoustic guitar blended with a rhythmic, dream-like synthesizer acting as percussion with a “time” feel that is immersive and mesmerizing. One of the most experimental sounding of all of Dill’s songs, “Perfect There” is an atmospheric jewel and features his ability to easily switch from varying musical styles with ease.

“Never So Beautiful” is a pop masterpiece and features soft harmonic vocals, a strikingly complex arrangement of instrumentation and a vibrant melodic energy akin to Brian Wilson’s “God Only Knows”. This song best represents Dill’s perceptive production skills and features a subtle, yet sunny mandolin artfully balanced with a vintage Rhodes piano and soaring vocal choruses.

“Hide and Seek”, is one of three songs co-written and co-produced with Derek Holt, who wrote the hit classic rock ballad “I Love You”. “Hide and Seek” is a gorgeous palette of Dill’s soothing vocal style, honeyed Harrisonesque slide guitar, and prominent melodic percussion. Holt’s exceptional skills as a co-producer on this track are quite apparent, as this song is undeniably strong in its genuine emotional tone and incorporates an intriguing lyrical story line that is also evident in Holt’s beautiful, timeless track, “I Love You.”

The title track, “Follow the Summer/Pink Skies” is a beautifully orchestrated pop/rock ballad that features a melodious blend of harmonic vocals, artful instrumentation, and sensually poetic lyrics. The overall “feel” of the song is an artfully composed nature inspired lullaby, as the song seems to follow the slow, steady rhythmic motion of ocean waves.

Not mentioned here is the fine "Miss America", a highly melodic midtempo track, and the somewhat rocking "Happily Ever After".

This one's a must get for fans of sophisticated sunshine pop, and as a side note, three tracks were co-written and co-produced with Derek Holt of the Climax Blues Band. To that, I'd say this is one they certainly did get right.