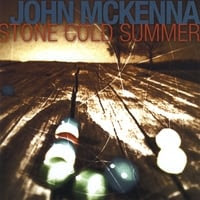 John McKenna may not be a name that strikes you as familiar, but when I add the information "former lead singer of Red Guitar", many of you will go "ahhh". (Others, no doubt will ask "Who was Red Guitar?" The answer is here. That disc was #21 in my top 100 of 2006, by the way.) Anyway, McKenna left the Midwestern band last year, moving to California. So now that he's literally not in Kansas any more, how does his first solo disc stack up?

Quite well, thank you, and it's not a replication of Red Guitar's sound. It's just as melodic (if not moreso), but instead of Red Guitar's heartland U2/Coldplay orientation, what we have here is something with a mellower vibe, in tune with his California move. In fact, it reminds me a great deal of The Autumn Defense and Hotel Lights, two projects that saw members break away from their famous bands (Wilco and Ben Folds Five, respectively) to create their own sound. The comparison also holds up as McKenna is similar vocally to John Stirratt and Darren Jessee.

Opener "Stay In My Mind" is a perfect example of this sound, slinking along with a hummable melody and California feel. "Dedicated" is a bit perkier, with an excellent chorus that recalls some of Red Guitar's better moments. The title track and its effortless melody is a particular standout, moving into Jayhawks territory. Other highlights include "Blues & Greens", which rocks out more than the rest of the disc, although in relative terms; the dreamy "Into The Wild", and the closer "The Man In Me", which starts off with an awkward cough and a count-in that segues into a 70s-ish gospel/honkytonk/folk number. Stone Cold Summer is a fine debut that avoids the "lead singer goes solo and puts out watered down version of his band disc" trap that's so common in cases like this.

CD Baby | Official Site
Posted by Steve at 7:49 AM

john is actually still living in kansas city. it's just his music that sounds californian.

Huh. I could have sworn I read somewhere when doing this review that he relocated to California, but I guess I was mistaken.

Just went and listened and his music is very good. I did pull this statement off of his myspace page.

Then it goes on to say the new cd sounds like his new California lifestyle.

Thanks for the clarification, Bryan. I didn't think I was hallucinating his move to California.