CD of the Day, 1/31/11: Secret Powers-What Every Rose Grower Should Know 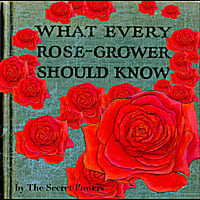 Usually I post a review after I've listened to an album over a period of a couple of weeks. However, I was so stoked to see Secret Powers was out with a new album that I decided to experiment and live-tweet a review on Twitter while listening to it for the first time. So here are my initial reactions to their fourth album in four years (the verbatim tweets):

* Holy crap, Secret Powers is out with another album (4th in 4 yrs). First 3 were classics, and digging the first track

* It's called "Generation Ship", sounds like a demented outtake from ELO's Time. Maybe I'll just live-tweet my first listen to the album.

* Next up is "Tarantula", a rollicking 2:16 tune about being afraid of them. It's so catchy I almost want to find a tarantula to sing it to.

* "What Every Rose Grower Should Know", the title track, follows. With most bands this would be a metaphor. Not with these guys.

* Track #4 is "Candy". Straight-up power pop, melodic if unremarkable. Still might be the best song on a lot of other bands' albums.

* Next is "The Desert". I knew these Montana boys had a quasi-Morricone Western in them, complete with Jew's harp and portentous whistling.

* "Crocodile" follows. Unlike "Tarantula", this is not a literal title. Instead, it's a pleasing mid-tempo love song.

* Next track: "I'll Be Home". Solid, if unspectacular, followed by "It Should Have Been Me", a classic SP-sounding track w/fun piano backing.

* "Queen of Bizarre" not as bizarre as its title or some of their other stuff, but another quality tune.

* "In The Way" a decent track, "Blue Thing" is classic Schmed, and closer "My Idea" returns to the ELO motif a la Side 3 of Out of the Blue.

* All in all, sounds like a top 10 contender (albeit a bit front-loaded). Thanks for putting up with my first ever live-tweet album review.

Depending on how many Twitter followers I lose, I might do this again in the future for a disc I'm eagerly anticipating and/or surprised to discover. Here are the usual links:

Nifty! Not only did I enjoy this CD, but eMusic has just added a couple of their previous discs, which I'm now happily checking out. Thanks!