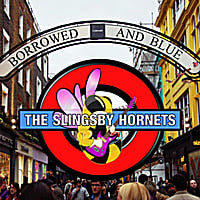 The Slingsby Hornets-Borrowed and Blue. Jon Paul Allen (a/k/a Frank Slingsby) is back with his fourth album of half-covers and half-new material and the results are once again appealing. On the covers side, his rocked-up "Lady in Red" (Chris DeBurgh) and "Yesterday Once More" (The Carpenters) are his most daring reinterpretations to date while David Essex's "Rock On" also succeeds. Meanwhile among the new tracks, the Tommy Keene-like "It's Gonna Rain" is the standout. If you enjoyed the Slingsbys' mix of covers and new tracks before, you'll want this one. 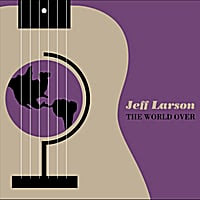 Jeff Larson-The World Over. Consistency, thy name is Jeff Larson. He should have a patent on the laid-back, melodic sound of mellow SoCal rock that he cranks out every year or two, and once again he's assisted by Gerry Beckley and Dewey Bunnell of America as well as Jeffrey Foskett. So you know what you're getting here, but if you were to going to update your "Best of Jeff Larson" playlist, you'd want to pick "Monday Clouds, Tuesday Rain", "Approaching Midnight" and "Point of Rising" (which rocks a bit harder than Larson's usual fare).

Mark Lane-Something New. Something New is LA singer-songwriter Mark Lane's first release since 2004's Golden State of Mind, and it's a treat for fans of artists like David Mead and Josh Rouse (the pre-move-to-Spain Josh Rouse, that is). Among the highlights, the ornate opener "For Whom it Concerns" brings back memories of Luxury-of-Time-era Mead, "Back in the Swing" and "Please, Lillianne" are lavish piano pop with a hint of the Beatlesque (incidentally, Lane played all the instruments here except strings), and the midtempo rocker "The King of Silence" has a noir feel to it. Fine stuff, and make sure you have a listen below: