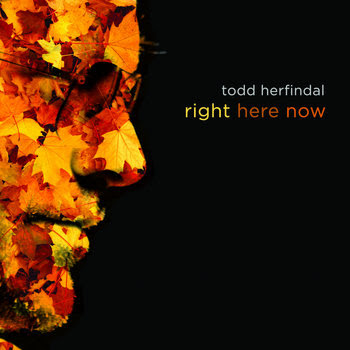 Todd Herfindal-Right Here Now. Todd Herfindal, the Ex-Meadows frontman and longtime running mate of the recently reviewed Rich McCulley, is back with his second full-length solo album and it's another fine collection of roots-influenced power pop. A handful of these tracks were already released as singles and reviewed earlier, but they fit together even better with the whole of the album. McCulley co-penned all but one of the tracks with Herfindal, and if you enjoy his material you'll want this one (in fact the title track appeared on McCulley's last album as well). The midtempo "Keeping Me Up Nights" kicks thing off with aplomb, while "She Can Run" is janglly bliss. The middle three of "Gratitude", "Shine Shine" and the title track are just as melodic as I remember them from the singles release, and the wonderful acoustic-based "Closer to Home" makes a nice complement to the Tom Petty-ish "Hang the Stars". Herfindal manages once again to make it all sound effortless, and you can verify for yourself at the full album stream below. The House of Jed-The House of Jed EP. A funny story about this side-project band of Admiral Twin's Jarrod Gollihare. About a month ago I came across this EP with the band name Away and I was about to review it a few weeks ago. But before I could the EP disappeared from CD Baby, only for it to return about a week ago with the more SEO-friendly band name The House of Jed. It's not too far off from Admiral Twin's brand of sophisticated power pop, and the opener "Coming Off Pretty" and its clipped, slightly-distorted guitars make for a strong introduction. The propulsive "Last Entry (Gotta Run Now)" and "I Won't Survive You" come across as Spoon mixed with Of Montreal, while the closer "Everybody Lies" is probably the closest to the traditional Admiral Twin sound. An interesting effort from Gollihare & Co. and a must for AT fans.


Sell Music online at ReverbNation.com
Posted by Steve at 2:20 PM