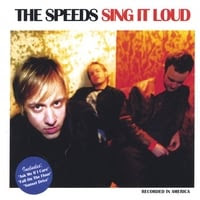 Pittsburgh's The Speeds win the truth-in-advertising award with their new release, Sing It Loud. Props to Ray over at Kool Kat for releasing this one on their own imprint - it's vintage power pop which they compare to "The Shazam, The Jellybricks, Cheap Trick, and early Rich Creamy Paint", and I'll add bands like The Rosenbergs and The Superficials to that list.

Leadoff number "Everywhere I Go" kicks things into high gear, and the title track follows with similar gusto (and a great guitar riff). Neither of these songs fool around either, each clocking in at just over two minutes. They let you catch your breath with the next track, "Sunset Drive", a dreamy ballad in the vein of Jet's "Look What You've Done" (but only better), but it's back to the rawk with the next three tracks before things slow down (ever so slightly) for the relatively midtempo "Shiver In July", perhaps my favorite track on the disc.

Here are some mp3s:

You can sample the rest of the tracks at cd baby, but make you sure you buy it directly from the source, where it's only $10, the lowest price around.
Posted by Steve at 7:26 PM