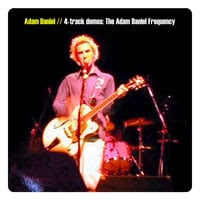 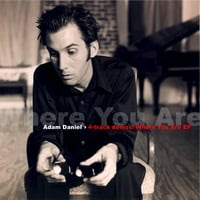 Back in 1999, Adam Daniel made a huge splash in the power pop/pop underground world with the release of Blue Pop. Lauded by many as one of the top guitar pop discs of the 90s, Blue Pop is an essential part of the music collection of anyone who reads the blog. But he kind of disappeared after that, going on hiatus from the music business for the last several years. Well, as you can see above, he's back with not one, but two new releases: The Adam Daniel Frequency & the Where You Are EP.
Let's take 'em one at at time. The Adam Daniel Frequency is the name of his touring/recording band, and it's the more uptempo of the two releases. Opener "Cameo" actually has a funky feel to it (not unlike David Mead's "Chatterbox"). "It's Automatic" is power pop bliss, an excellent midtempo number; "Breathe" is a great ballad; "Supernova" sounds like vintage Teenage Fanclub; "Captain Hallucination" is Beatlesque; and "Where You Are" (which interestingly is on this disc, but not the Where You Are EP) is a haunting slow number.
As for the "Where You Are"-less Where You Are EP, it's a much mellower affair, with some fine ballads. The real standout here is the finale, "Soundtrack", which sounds like vintage Emitt Rhodes, early McCartney, etc.
CD Baby (ADF) | CD Baby (WYA) | iTunes (ADF) | iTunes (WYA)
Posted by Steve at 10:26 AM

Thank you for your review! I'm glad you enjoyed my new albums. Just to let you know: Both of them were submitted to eMusic -- if they're not already available there now, they will be soon.