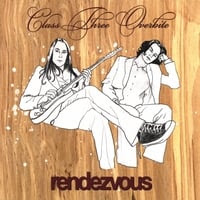 If you're old enough, just close your eyes and picture the scene in your head: you're sitting on the floor of a wood-paneled basement with wall-to-wall carpet and you've wearing a pair of headphones listening to the latest rock LP you bought from the local record store for $4.99. The year is 1976. Now open them. You're sitting in front of a computer listening to mp3s and the year is 2007. Either way, it works for Class Three Overbite's Rendezvous, a gem of a disc that will appeal to rockers young and old.

Class Three Overbite is the brainchild of Mike Elgert and Bradley Jendza. Elgert should be familiar to power pop fans and readers of this site; his Days Gone By placed a cool #59 on last year's Absolute Powerpop Top 100. But whereas Days Gone By was more straightforward Jellyfish/Superdrag-inspired power pop, Rendezvous is more in debt to 70s glam and "corporate rock". The opener "Milkshake" sounds like one of Tommy Shaw's Styx tracks; The title track, with almost a danceable disco beat, reminds me of none other than Kiss's "I Was Made For Loving You", their stab at disco-rock. "No Good Rotten" is my favorite track on the album, with a heavy Queen influence - but more the Queen of Brian May than Freddie Mercury, and "Life Is a Piece of Cake" is cut from the same cloth. And "What's So Funny" is probably the album's quintessential track, trading folky verses with a glam-rocking chorus.

Hat tip to Larry. On 4/3 he plugged the Drake Bell CD. It's outstanding.