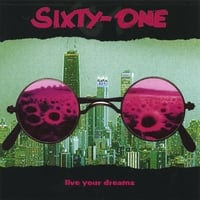 Germany isn't exactly known as a hotbed of power pop in the way that say, Spain or Australia is. But after fine 2006 releases from artists like Monkeeman and Spyderbaby, and this new disc from Arne Herrmann, who goes by the moniker Sixty-One, maybe it's time to reconsider.

Although Herrmann hails from Germany, the sound here is more Swedish, in the vein of poppers like The Merrymakers and (more recently) The Tangerines - mostly mid-tempo, very melodic, a hit of jangle, and earnest-sounding vocals. "It's True" and "Why" are classic examples of this sound, while "We" and "Feel It" bear more of a 60s influence. Other highlights include the ballad "By Now", which does sound a lot like Spyderbaby, and the uptempo "Oneday".