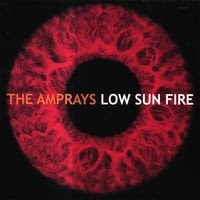 Kevin Grasha doesn't have your ordinary musician's biography. First of all, Grasha is a journalist who, according to his site, "has interviewed Kim Deal of the Breeders, Barack Obama, at least three convicted murderers, and a man who auctioned on eBay appearances of a cup filled with water that Elvis allegedly drank in the 1970s." Meanwhile, he also underwent an emergency craniectomy (that's brain surgery) a few years back. More conventionally, he was once in Rosavelt, a band who put out a fine record in 2004 called The Story of Gasoline only to break up later.

But all of this would be merely another human interest story if his record didn't rock. But it does, and Low Sun Fire by The Amprays (Grasha's band/project which includes a couple of other ex-Rosavelt members) is music for the ears of anyone who's into The Replacements, early Wilco and Guided by Voices. "Levitate" comes roaring out of the gate, nailing their sound with guitars and hooks all wrapped up in 2:24. "Less Than Safe at Last" is reminiscent of the better moments of Paul Westerberg's solo career; "I Woke Up" would have fit in nicely on Wilco's AM and "The Stuntman" is where the Robert Pollard comparisons come in. While The Amprays may be not reinventing the wheel here, they're certainly doing their best to keep it spinning in a manner that you can rock to.