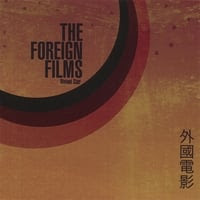 For the third time* in this blog's history, here comes the siren:

There are discs about which I can wax poetic, and then every once in a while I come across one that makes me feel like Chris Farley in those old SNL skits where all he could do was slobber over a celebrity and saw "you were awesome". Such is almost the case for The Foreign Films' Distant Star (I say almost because this post is going to be a bit longer than just "it's awesome"), a 2-CD masterpiece of psych pop that takes the sound of luminaries like John Lennon, Robyn Hitchcock, XTC, contemporaries like Cotton Mather, Robert Harrison solo (the disc is very reminiscent of Future Clouds and Radar, only more consistent), Robert Pollard, Deleted Waveform Gatherings, and mixes it up to create something that stands astride its influences as its own artistic statement.

All of you Matherites out there should truly be stoked by this one; on the heels of Stockton's release featured last week, this one will be truly up your alley. The Foreign Films is actually Hamilton, Ontario's Bill Majoros, and he's a vocal cousin to Lennon and Harrison (Robert, not George). Majoros has been a vet of the music studios for 15 years, as sideman and producer, and it shows on his debut as frontman (he wrote all the tracks as well) as the disc is a sonic as well as melodic delight. Given the band name, it's almost a cliche to describe the sound here as "cinematic", but if the shoe fits...

As far as the individual tracks go, there's 22 of 'em, and I haven't found a bad (or even mediocre) one in the bunch. This is the type of disc that cries out to be listened to the old-fashioned way: all at once, consecutively, preferably on a nice set of headphones. Which is not to say it doesn't work on the iPod either; when these tracks came up randomly among those from other artists, they stood out as well. I guess it's obligatory that I single out a few; coming to mind first are the disc's bookends, opener "Remember to Forget" drew me in the first minute I heard it as a sample on CD Baby, and the closing suite, the 8 1/2-minute "The Snowglobe" is one of the few of those that actually work. "Invisible Heart" is another standout - it's one of the more rocking tracks on the disc - and "Clouds Above Radio Towers" is the quintessential Cotton Mather-meets-GbV track. But there's really no drop-off in the others either. I do throw the phrase "top 10 of the year contender" around a lot (probably more than 10 times a year, for sure), but this is a top 5 contender and maybe even higher. I'll just wrap it succinctly: Get. This. Album. Now. (It's priced at $12.97, typical for a single disc)

*for those keeping score, the other two sirens were for Travis Hopper and Josh Fields. In retrospect, the Hopper was an excellent album, but maybe not quite siren-worthy. Fields, on the other hand, still deserves his.
Posted by Steve at 1:09 PM

Thanks for the tip. I'm waiting to hear back from CD Baby about my download, but have listening to the stuff on the website and love it.

I've been listening to this almost non-stop since I got the files from CDBaby. "Remember To Forget" might just make my list for best song of the year.

I'm pretty sure he was also involved with a band called Flux A.D. a few years ago. Their CD "Transatlanticthoughts" is well worth tracking down (maplemusic used to stock it) - full of pop gems.

Bill was in Fluxad(guitar and songs)and another band called the cloudsmen!!!Very cool music!!!
The Foreign Films is his new thing...great live too!