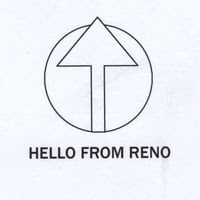 First off, let it be said that Hello From Reno is not from Reno, Nevada. Nor is it a new project from former Loverboy lead singer Mike Reno. Instead, Hello from Reno is an LA band which is definitely worth a listen even if they fail the truth-in-advertising test.

Mixing roots pop and jangle pop, Hello From Reno will be appreciated by fans of Marshall Crenshaw, Walter Clevenger and the Traveling Wilburys as well as some recent artists featured here like The Offbeat. There's plenty here to choose among - from the bouncy leadoff number "So Far Away" to the dreamily midtempo "Angela" to the wonderfully jangly "Good Thing Coming". The boys also pay homage to Roy Orbison on - wait for it - "Roy Orbison", and do so tastefully by recording the type of song he'd sing without attempting the futile task of imitating his vocals. This is the kind of hidden gem of a disc that you're happy to find, even though it isn't going to reinvent the wheel or change your life.