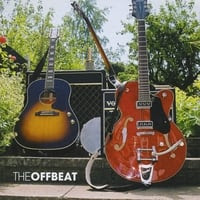 The vintage guitars on the cover tell it all: The Offbeat is all about 60s British pop, jangle pop, and all points in between. The is without a doubt the best album of its kind since The Red Button and Smith & Hayes from last year, and needless to say, fans of those discs will want to snap this one up. The Offbeat are actually English, so in that respect they have one up on the Yanks who served the style so well on those other discs.

"Lonely Girl" is the leadoff track, and it's an elegant piece of early(or pre)-Beatles pop. The midtempo "Wasted" follows with a more Rubber Soul-era Beatles sound, and "Keep It Real" has a Beach Boys/Bacharach-without-the-flugelhorn vibe. "Say The Word" is a smooth, Merseyside number, "First Love" is a true melodic delight, and "Between Us" has a bit of a Motown beat to it. In fact, there truly isn't a bad track on this album, and if the calendar read 1965 instead of 2008, these guys would be regulars on Top of the Pops and American Bandstand. I'd say we have a real top 10 of 2008 contender on our hands here.