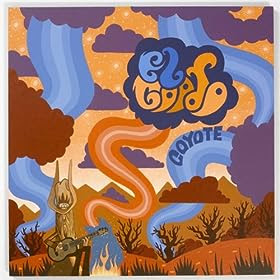 There's a band from Pennsylvania out there named Unknown Mystery 60's Group, and the conceit behind them is that their albums are really lost artifacts from private tapes of a band that played in the 1960s and didn't go anywhere. It's an interesting concept that comes to mind when listening to Coyote, the second album from the Welsh band El Goodo (itself named after the classic Big Star tune) - because if the name wasn't on the disc label, you'd swear you were hearing a lost album from the 60s. (Of course with the trippy cover art, perhaps only the 2009 copyright would give it away.)

El Goodo borrow heavily from many bands of the era (Beach Boys, The Throgs, The Byrds), and right off the bat "Feel So Fine", with its dirty-sounding fuzzbox guitars and reverb-drenched production, takes you right back in time with its Kinksian sound. "Be My Girl" would fit right on Nuggets, while "Aren't You Grand" has a Spaghetti Western sound behind its Merseyside melodies. Elsewhere, the gentle "Don't Worry Marie" could be mistaken for a lost Peter & Gordon track, "Informational Overload" recalls "Pleasant Valley Sunday", the horns of "Talking to the Birds" are straight out of Love, and the jangly "I Can't Make It" is positively Byrdsian. Also of note is "Pete", which features vocals not unlike John Lennon's "captain's voice" in "Yellow Submarine" and a feel that recalls the mid-period Beatles' goofier moments such as "You Know My Name".

FYI, the single "Feel So Fine"/"She Turtle" from Coyote is available on emusic! The first album is also there; perhaps Coyote soon will be?