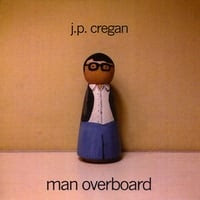 As those who subscribe to my Twitter feed might know, I'm big into fantasy sports as well as power pop. But never the twain shall meet - or so I thought until I ran into the debut release of LA's J.P. Cregan. For those into fantasy basketball (I'm a baseball and football guy myself), you may know him as ESPN's John Cregan, who writes a column on the topic at espn.com. But to those in the power pop community, you'll be knowing him as J.P. and you'll be enjoying his debut release Man Overboard as one of the top singer/songwriter discs of 2009.

Cregan isn't a musical novice - he's played in several bands and is currently in Parklane Twin, a "Popicana" band who put out a fine 2007 disc. But on his solo debut he emphasizes the pure pop (for now people) and it's all catchy as hell. Although opener "Carolyn (The Pledge Drive)", with its Nick Lowe/Brian Jay Cline-style country/roots vibe, might be lumped in with his band work, it's a springboard to the power pop stylings of "Count to Three" and "Barbara is Strange", perhaps the album's best track - pure ear candy with Beatlesque backing vocals, tambourines, fine Telecaster work, and a great melody.

That opening three might be worth the price of admission alone, but the hits just keep on coming. "Jeni", with its "Misery"-style tumbling piano chords, a Costello/Lowe melody and chiming British Invasion guitars, is another standout. "Out of Our Minds", with its Spectorish opening, is a treat, "Miss Highland Park" lays on the handclaps as it recalls Marshall Crenshaw, "Shouldn't Take it (So Hard)" rocks a la Matthew Sweet, and "Winter of '85" both namedrops and serves as an answer song to Bryan Adams' "Summer of '69". The disc ends on a high note with "The Underdog", another outstanding Elvis Costello-inspired track. In the vernacular of fantasy sports, Man Overboard is a no-brainer first-round pick, a power pop equivalent of Albert Pujols, Adrian Peterson or LeBron James.