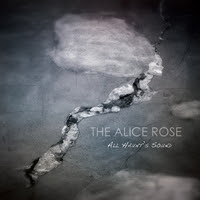 It's become apparent I've been doing this a while when I'm doing more and more reviews of second discs of bands I've discovered since starting this blog. The latest example is Austin's The Alice Rose, whose wonderful 2006 debut Phonographic Memory has been followed up by their equally wonderful sophomore release All Haunt's Sound.

The Alice Rose has a lush sound that falls between indie pop and power pop, but whatever the categorization, the common denominator is their highly melodic songcraft. The disc opens brightly with "She Did Command", which has a Jon Brion/Michael Penn feel to it, while the jittery beat of "Waste Away" sounds a bit like how Spoon would sound if they were guitar-based instead of piano-based. "Maybe a Ride" would be the obvious choice for the "single" from the disc if singles were a viable format these days, with its bright melody and uptempo sound. The Beatlesque "Slumberella" is another winner, and the joyous "It's All Allowed" will set your toes to a-tappin'. If you like your pop with a little bit of a sophisticated edge, The Alice Rose is perfect for you.

I love this record!!