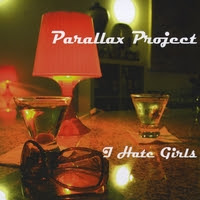 Mike Giblin might not be a household name in the power pop community, but his bands certainly should. After being in the great Cherry Twister with Steve Ward and Ross Sackler, Giblin started Parallax Project in the early decade, putting together whoever he happened to be playing with at the time to release albums like Oblivious and Perpetual Limbo, discs power poppers everywhere should have in their collections. (Incidentally, the band is named after this Allegany University astronomy project, from Giblin's home state of Pennsylvania,) Now he's back with album #3 on the Kool Kat imprint, and he enlisted the legendary Don Dixon to produce and The Plimsouls' Eddie Munoz on guitar. The result is a pop gem that's catchy and soulful at the same time.

Opener "All the Same" sets the bar high, an uptempo treat that channels Squeeze and the Kinks, and built around a "Day Tripper"-style guitar riff. The tongue-in-cheek title track is in the same vein, as Munoz' guitar work on these tracks is a step above the usual power pop fare. Meanwhile, "Half" is a fun tribute of sorts to early Elvis Costello - Dixon provides Steve Nieve-like work on the organ a la "Radio Radio" here. Giblin's effective here when the beats slow down as well - "Watching the World Revolve Around Her" is one of the year's better ballads, and "The Day After Tomorrow" is an earnest yet melodic number. True to the spirit of the proceedings, the disc closes with a cover of the The Velvelettes' "Needle in a Haystack", a Motown chestnut that doesn't sound a bit out of place. And if you like that cover, let it be known that Kool Kat is offering up a bonus disc of covers if you order directly from them, featuring tracks like ELO's "Telephone Line", The Kinks' "Well Respected Man", and possibly my favorite Faces song "Cindy Incidentally".